Notice the last sentence in that verse. “I will send HIM to you.”

Seems the Spirit is the last one to get our attention. We put Him at the bottom of the list.

We count the Spirit as one of the Trinity because the Bible tells us to do so. But why do we so often view Him as the lesser of the three, an occasional afterthought, when John tells us in the verse above that it is better for Jesus to go and the Spirit to come.

Another translation of that verse says: “It is expedient for you that I go away.”

Though Jesus now sits at the right hand of the Father in Heaven, it’s the goal of most Christians to follow Him and to become more like Him. How do we know Jesus if he’s away in the Heavenly realm and we’re here on earth, and why was it better for Him to go away?

Jesus’ task on earth was completed on the cross. It is a finished work. The job was done, and thank goodness for that.

But we do well to remember that God himself took on our humanity as Jesus the Son, and by His own choice He limited himself by becoming man. Jesus (as man) could not be all things to all people, in all places at all times.

In other words, if the Lord Jesus were here today in His human body, He couldn’t be where I am now and where you are at the same time.

But there is one who can, and is.

If the “headline” on this post makes you uncomfortable, I join with you in that discomfort. I mean no harm and no disrespect. It makes me uncomfortable because it points out my failure, and moreover, my sin.

So many times, I’ve heard people in church say … ‘the Holy Spirit was really present in our service today.’

Are we guilty of viewing the Spirit as some magical energy force, more powerful at one time than another, choosing to “show up” at one moment and not the next? Is He just some heavenly fog that we eagerly await to descend upon us and transfigure the moment? Is He just some spiritual portal through which we must pass to touch the face of God?

A pastor in my hometown was courageous enough to ask this question to his congregation last  Sunday. His question stopped my thoughts dead in their tracks. Why would I long for the Spirit to show up and do a great work in my life when he’s already right there, all the time? He lives inside of me.

He grieves when I violate my moral consciousness. He disciplines me in love when I go against His will, but He stands beside me at all times and loves me because I belong to Him. The deal is done.

Somewhere along the way, we’ve gotten things wrong. We’ve bought into the idea that the Spirit is some transcendent force or power – some notion just beyond our grasp and reach. We hope and pray that He will show up and move us on Sundays.

We’ve learned it all wrong, and so now, we have a lot to un-learn.

Thank goodness for the Better Way, and let the lessons of un-learning begin. 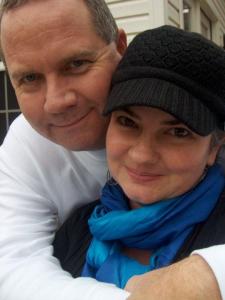 This is Dana, my darlin'

(Blogger‘s Note: In the ongoing series on Light, today’s bonus post is a guest blog from Dana Watkins, who just happens to be my wife, best friend and partner in all that I do. Dana is a missionary with experiences in Greece, Morocco and Mexico. She has bachelor’s and master’s degrees in speech communication from Arkansas State University. Look for her own personal blog coming soon.)

Have you ever wondered what it would be like to live in Alaska during the extended periods of darkness? I was listening to the news a few mornings ago when I heard a familiar topic being discussed: S.A.D. It took me back many years ago to my basic oral communications class when I was looking for a topic for one of my “informative” speeches. I chose the topic of S.A.D.  If you don’t recognize the acronym, it stands for Seasonal Affective Disorder.

There is a medically proven type of depression that is caused by lack of sunlight. Over the years, in my studies of God’s Word, I have seen that many times for every biblical principle there is a physical manifestation that we experience. I have had times in my life where I was soaking in the Light of the Word of God, and times where I felt like I was living in Alaska, during the dark period.

Symptoms of S.A.D. include: Increased appetite with weight gain; increased sleep and daytime sleepiness; less energy and ability to concentrate in the afternoon; loss of interest in work or other activities; slow, sluggish lethargic movement; social withdrawal; unhappiness and irritability.

Treatment may include medication, taking walks in the daytime with sunlight if possible, and even a “flourescent light treatment” replicating the closest form of light to natural sunlight.

As you may imagine, LIGHT has been a topic of discussion around our house these days especially. Lately I have found myself challenged with a certain level of  “sadness.”  I could list many reasons that might be contributing, but if I look to the solutions, there is one thing that is 100 proof.  Jesus referred to Himself as the Light, John 12:35…..He also said that even ..I (Dana) am the light to a dying world and to let my light so shine before all men that they may see my good works and glorify my Father in heaven. (Matthew 5:14..16)

I have also recently started a new exercise program and isn’t it interesting that many of us know what to do, but knowing is not enough, we must ACT on that knowledge, by exercising, or reading and studying God’s Word, or letting our light shine.

Jesus said that we should learn from little children. An old Sunday school song comes to mind, “This little light of mine, I’m gonna let it shine.”

I encourage you to soak up HIS light and be a flashlight to others….shine your own light God has placed in you.