I was mostly quiet yesterday. I simply couldn’t speak.

I’d pulled into the parking lot and was just about to run into the grocery store for a few errands when the text message dinged. I couldn’t process the words that Tommy Shewmaker died a few hours earlier. I didn’t even know Tommy was sick. I’m so ashamed. So broken.

It was as if I’d been punched in the heart. I sat there staring at the phone for 15 minutes as paralyzed as I can ever remember. At some point I walked into the grocery store, but couldn’t even remember why I was there.

He’d apparently been diagnosed with an aggressive cancer around Thanksgiving as I was nearing the end of the Camino de Santiago. And he died about 50 days later. It was that fast. I’m devastated, but this isn’t about me.

In a world I fail to comprehend less and less each day, Tommy was one of those men I admired purely because his head was screwed on so straight. His decency surpassed all standards. He was radically good.

We met in 2010 during my short employment at a tech company where I was completely out of my league – a right-brained creative word guy in the midst of a bunch of left-brained geniuses. Tommy was one of them, but he was different. He was so very normal. I mean it as the highest compliment.

He loved his family. Spoke about them all the time. They were his single highest priority. He told great stories and had a voice I always thought belonged on radio. He loved the ribs I’d occasionally cook for a company lunch. Loved sports. Worked out almost every day.  Tommy was a lot of things. But mostly, he was just so kind and decent and normal. I loved that he was so normal. Blessed that he was so kind.

My father passed away about seven months after my hire. Tommy and I were good acquaintances – not close, do-things-together kind of buddies – but friends. Yet, not necessarily at that time the kind of friends who went out of their way for one another. So when from nowhere he walked up to embrace me at my father’s funeral I couldn’t have been more genuinely taken aback. It was Saturday, and Tommy lived 25 miles away. He’d gone exceedingly out of his way to comfort me. He just showed up. It’s one of the kindest gestures I can ever remember, yet so much more than simple gesture. It was an action from Tommy’s heart. He mourned for me. It’s incomprehensible that I mourn him today.

God, he was such a decent man.

When I left the company we stayed in touch. Tommy loved travel.

About this time last year, he wrote me with several questions about Ecuador and the experiences I’ve had living there off and on the last three years. He said he was thinking about retirement, albeit a few years away. He spoke of the responsibilities he had to family, especially his grandchildren, and yet his sense of adventure longed for parts unknown. He wanted to explore Latin America as a possible outpost for retirement, and making the most of his retirement dollars. It thrilled me to speak with him about it, and share my ideas. I mostly just enjoyed that it was Tommy.

We should make a point to get together and talk about it over a cold beer, I wrote. Come to my house … I’ll break out the grill for those ribs you love, I said. He agreed we would make the appointment to catch up and discuss our mutual interest in so many things.

That sit-down never happened. I never saw Tommy again. He crossed my mind a few days ago. I should give him a call, or write him a note, I thought, before moving on to the next “important” thing. Tommy was dying and I didn’t even know it. Now he’s gone.

As I lay in bed last night I couldn’t help but think how selfish it was to be so sad that Tommy’s gone. I know where he is. I should celebrate what he’s now experiencing this very minute. I wish I could hear him speak of it in that crystal-clear baritone voice with that laugh so genuine to the pit of his gut. You could hear Tommy laugh across the building. His joy was effusive.

He was a passionate servant to his family. Purely decent. Humble. Real.

Can there be a greater compliment to a man? I think not.

Rise high in Glory, Tommy Boy. I miss you.

Thank you for being my friend.

In the formative years when I wasn’t playing golf on Sunday, most of those afternoons were spent watching the finely covered major tournaments broadcast on CBS. Any sportsman will tell you the coverage of CBS’s Masters is among the classiest of television events.

From the play by play, to feature profiles, to the ceremonious passing of the green jacket, Jim Nantz, Verne Lundquist and Gary McCord captured viewers’ attention from tee to green.

Even the commercials were classy.

You need not be a died-in-the-wool fan to remember the 1970s Smith Barney commercial starring famous actor and producer John Houseman.  This line he delivered at the end of the commercial, is recalled three generations later, not only because of his brilliant delivery, but also because of the profound message it carried:

“Smith Barney. They make money the old-fashioned way…they earn it.”

Last night, Dana and I were discussing friends, friends of friends, and all the relational dynamics involved in what makes people “click.”

It started with the discussion about a friend of a friend who’d told his friend he knew I didn’t much care for him. Dana’s friend shared that news with her earlier this week, and she passed it on to me.

This is what Dana said she told her friend: “Steve’s not gonna just give his friendship away. It’s something he’ll (the friend of the friend) have to earn.”

Honestly, I’d never given that much thought to my life’s relationships, but I won’t deny its truth. 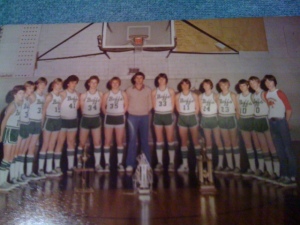 This photo, taken in 1980, is my championship team that went 30-6. I love every one of these guys still today. The friendship among us was truly earned. I may never see some of them again, but I love every guy in the green and white … and coach Jim Ellis in the center.

I know a few friends who naturally lavish their love on others. I’ve always wished I could be more like those people. Perhaps it’s a personality flaw, or maybe it’s just a byproduct of life experiences, but after we had the conversation, I realized it’s true: I don’t just hand out free tickets to friendship. And you don’t change the way a 46-year-old man “is.”

This is Chuck Gschwend, a pastor at Fellowship Bible Church where I attend. He’s the single most loving man I know.

Most men I know don’t have a wide circle of friends. In fact, most are lucky if they truly have a good friend at all. And oftentimes, I think, we consciously choose to limit our circle of friends because of the value we place on the gift.

And for me, that’s precisely what friendship is – a gift. One to be thoughtfully given, and thankfully received.

The friend of the friend who told his friend I didn’t much care for him is a guy I’ve met twice. My recollection is that we talked about dogs, work and football. Chit-chat, it was for the most part. Nothing real.

And it’s because of the precious value I place on true friendship that I write often about my best of friends. Dana is one. The other is a high school buddy and golfing parter who’s closer than a brother.

Brady and I have been friends for 34 years. We’ll be friends ’til we die.

My long-time buddy Brady Cornish – we talk almost every day, and shoot an occasional round of “extraordinary” golf.

Dana and I were acquaintances nine years before we married. In the first five years of our ‘relationship,”  she didn’t even like me that much. It took a long time for me to break down the barriers to see through to her heart, and she has the purest of hearts I know.

Sometimes I wish I loved people more. It’s what we’re called  to do, but it’s not easy is it?

Just wondering, how many “real” friends do you have, and what are the qualities you most admire in your best of friends?

Do you offer your friendship freely, or do others have to earn it?

In the spirit of John Houseman’s message, “Good friends don’t show up, bite you on the bottom and say, ‘Were here!'”