Any writer would have a difficult time counting all the things that affect his or her work. Places, different environments, other writers. Lots of things.

People inevitably affect the way we write, some from a technical, craft kind of standpoint, others from a place of voice and how we see the world, and tell the story.

These are ten people who’ve shaped the way my mind develops a story, and conveys it in black and white.

My Mom: After an unhappy first freshman semester at the University of Central Arkansas where I majored in public administration, I decided transfer to Arkansas State University with no idea about my life’s future. “Why don’t you talk to the people in the journalism department,” said said. And that’s where it began.

My Dad: Pat Conroy once said: “My father’s violence is the central fact of my art and life.” I didn’t live with a father who displayed violence anywhere near that of the Great Santini, but he was rough and tough enough. It was my father who evoked the strongest emotions I’ve known in a lifetime. Fear. Embarrassment. Gut rage anger. The strongest desire to do anything that would make him proud. It’s a strange thing to say, but my life is richer for my father’s rigid ways and a lifestyle more about his next beer than anything that had much to do with me. The stories born from my childhood and adolescence are a storyteller’s paradise.

Arkansas State University’s Journalism Department Triumvirate (Dr. Joel Gambill, Dr. Gilbert Fowler, and Dr. Marlin Shipman) : These three men were the foundation of ASU Department of Journalism for a good two decades. The foundational skills they passed on to me are are invaluable, and their great friendship was an uncommon encouragement.

Jesus: It’s pretty simple actually. Jesus was the greatest storyteller of them all. He was a master. Jesus used common, everyday, slice-of-life stories to teach the masses about God’s Kingdom.  His parables have been a model for my work from the beginning. For me, no story is greater, no image more amazing, than the prodigal son’s father running toward him upon his return.

J.L. Kimbrell (representing so many others): J.L. Kimbrell was an average, ordinary man from my hometown of Monette, AR. He was a farmer, a war veteran, loved his wife, told great stories of his own, and he was kind to everyone he met. He was like so many men in my hometown who, over the years, I had the chance to observe as they gathered at the local gin, or the implement company, or the duck blind. Watching their mannerisms and their language, even the way they crossed their legs was an extraordinary education. There are too many to name here. But I loved those men. 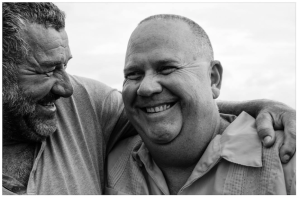 Fernand Brault: My French-Canadian friend told me an incredible story one day about his solo adventure from Montreal, Canada to the Bahamas on a vessel called Windseeker. To that point in our relationship, he’d never shared with me a story so captivating. As he shared the emotions he encountered when it came time to turn around and sail home, I was speechless. Fern’s tale was a great reminder that we all have a story. There is really no boring life.

Vegan Jake: That’s not his true name, but the name I used for the villain in Pilgrim Strong. Jake was a midwestern, number-crunching, vegan, atheist, extreme liberal of Polish decent, who believed it a sin to use things like washing machines, or lawn mowers, or even drink a Coke. As we spent time together on the Way of St. James, it seemed he expressed his disdain for my ways at nearly every turn.  One day I surprised him. “You can act as though I disgust you, but deep down inside you like me,” I offered. “You’re likable enough, High Roller,” he countered. He was a two-week lesson in conflict.

Jeannick Guerin: Another pilgrim with whom I spent considerable time on the Way. As 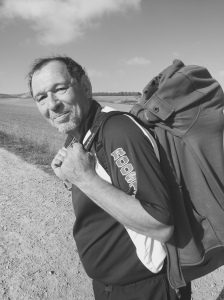 we stopped one morning for second breakfast and Jeannick explained his reason for walking, it was clear that a terminal illness had brought him from Australia to his homeland in France so that he might say “goodbye.” I never asked another question about it. Some things are more important than the story.

Bradley Harris: My first editor. Upon our agreement to work together back in 2013, Brad was pretty straightforward about his toughness. He asked me to picture a dial 1-10 and give him a number representing just how much I could stand without having a meltdown. I think I offered a nine. Brad taught me so much. Mostly that every story that gets told can no longer be about me. It’s all about the person reading the words.

I’ve never met Blue Like Jazz author Donald Miller, but his work has guided me for years. His recent book, Building a Story Brand outlines a simple, three-pronged idea for how stories can best hold readers’ attention. The writer first addresses a problem, then a solution, then explains how life is better because of that solution. Simple really. It’s a theme in many stories I write.