I spent two hours writing an entirely different blog post offering a detailed explanation about why I decided to take on a new daily blog. Then I threw it away. True and genuine as it was, it would’ve been far too divisive – a terrible start to a new and heartfelt purpose.

But there were some things this year that really impacted my view on the world in a deep, intimate and personal way – things we all watched – things many of us couldn’t believe we were seeing. One moment I recall in particular still tears at me. As Dana and I walked across Spain in October and November, I tried my best to process it all. To be honest with you a couple of days out there were downright depressing.

When I was a kid, I really thought I’d be president of the United States. There was an astronaut phase. In high school, I decided I’d probably settle for governor of Arkansas. I wanted to impact the world. Always have. 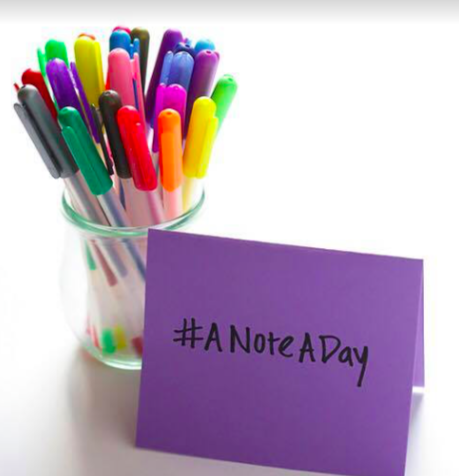 collective 48 years leading up to my last two. We’re increasingly fear-motivated and conflict-driven. Ironically, a world that’s become more available to us all is pushing many into polarized corners where we’d rather be with people who look like us think like us and believe like us. We’re approaching zero tolerance for diversity of opinion. Hatefulness is part of our daily experience. The kind of behavior I disciplined my own children for is now the acceptable norm among adults.

My heart wants to change all this. My head knows it probably won’t.

At some point during our pilgrimage I felt God tell me to let Him take care of the world. My responsibility, He said, is my own little corner of it. I decided to cast aside the things that are frustrating, disingenuous, even false, and drill down to something that is simple and genuine and true. And more importantly than anything, I think, I resolved to take the focus off ME. I’m sick of myself.

And so I’ve decided to write a note a day.

The simple discipline of writing 365 personal notes in a year is exactly what I need. In 2017, I want my life to be about what I know God desires for each of us. He wants us to take our eyes off ourselves. So many other things take care of themselves beyond that one, simple act.

It’s easy to imagine thank you notes, encouragement, apologies, special acknowledgments, maybe notes that should’ve been written, but never were. It’ll be interesting to see where it leads, but it’s one small discipline to keep me focused on what’s real and important. It’s not that big a deal really – just something I thought I could add to a few other daily rituals, just as I believe in walking, meditating and daily bible reading.

All notes will be published at a new, developing site noteaday.com. The site isn’t finished, but there’s a widget there now that will allow you to follow by email once posts begin on January 1. Feel free to sign up any time if you like.

I’m also open to your suggestions and ideas. Note categories, different approaches, whatever. It’s still a work in progress. Let me know what you think.

Feel free to join me on the new blog next year for the simple act of writing a note a day.