“It is impossible to travel South without turning one’s back to the North.” ~ A.W. Tozier

Not too many years ago, McKenzie conducted an informal, yet profound experiment.

He visited a nearby elementary school, walked into five different classrooms, grades one through five, and asked each student group this same question:

“How many of you consider yourselves creative artists?”

His findings? Nearly every student in the first grade raised their hand. Second grade, maybe two-thirds. Third grade, half. Fourth grade, one-third, and by the fifth grade, only two or three students raised their hands, and they were obviously embarrassed to do so.

How could this be?

McKenzie surmised that the school – the students’ actual supportive organization – actively  participated in the suppression of creative genius, and that it’s a trait among almost all organizations. Schools, the workplace, church, anywhere you might imagine, it’s the organization’s desperate attempt to maintain the status quo. At the heart of it all is that the organization takes on its own life to radically curtail change, that which would often be change for the good.

The organization, you see, wants to “survive” just as it is, and always has been.

A go-along attitude would have quashed my dreams as a writer, creative marketer and I’d surely never have written this post from a new base in the peaceful fishing village of Puerto Cayo, Ecuador, a place I consider an entrepreneur’s paradise where the risks are low and the potential for success is high. 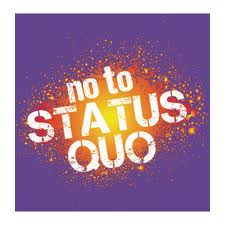 Just like me, I’ll bet you have dreams for 2013, and I want you to realize every single one of them. Here’s what I want you to do:

DON’T pull out a pen and paper tonight and jot down 10 quick “resolutions” five minutes before midnight.

DON’T get an accountability partner to hold you to your mutual commitment.

I want you to VISUALIZE your success stories in 2013.

In many NBA pre-seasons Michael Jordan paid a professional who would help him see his final shot in the championship series seventh game.

A few years ago, I even did it myself as I trained for my first marathon and at the end of each Saturday’s long run (which was just a bit further than the previous Saturday’s training run) I visualized myself crossing the 26.2 mile finish line as a volunteer placed a finisher’s medal around my neck.

Try any of these six ways to begin visualizing your laughable dreams, many of which I’ve adopted from the book, On the Verge, by Alan Hirsh and Dave Ferguson.

1. Use this formula: L = P + Q. That is LEARNING takes place when PROGRAMMING (that of your organization’s status quo) is subject to QUESTION. Learn how to ask the right questions to initiate a genuine quest for the answers.

2. Take more RISKS. Conformity is the result of obsession with safety. Diversity and adventure result from a willingness to take risks. Take yourself entirely out of your comfort zone. I’ve failed in a huge way, many, many times.

3. Think like a BEGINNER, not an expert. Even if you must “unlearn” much of what you think you already know.

4. Know that it’s okay to FEEL. I admire the great thinkers around me, but I wouldn’t take anything for my feelings and gut instincts.

I took this photo on the streets of Puerto Cayo less than 24 hours ago and must have gone back to look at it a dozen times. I love how these guys threw caution to the wind just to have a little fun.

play, do it, so that it becomes second nature.

6. Develop your personal MANTRA – that is, adopt, or create a set of words with a certain rhythm that resonates with everything you do. Five years ago, I adopted as my mantra a quote by renowned anthropologist Margaret Mead, who said, “Never doubt that a small group of committed people can change the world. Indeed, it is the only thing that ever has.” That mantra changed, and continues to change my life, and it’s the very thing I pursue every day.

(Dedicated to my buddy, Brady Cornish, who’s dropped just about 80 pounds in the last 11 months, on the fast track now to his goal.)

3 thoughts on “2013: Kill the Status Quo and SEE Your Laughable Dreams.”