Each morning’s routine was different, but there was always a routine.

Four o’clock wake-up call, two cups of decaf coffee (half teaspoon Splenda, one small splash French vanilla cream); 10 minutes of Seinfeld; 4:30 dress for run with all the attire perfectly placed on the guest bedroom floor the preceding night; out the door at 5 for a three-mile run; back in the door at 5:40 (give or take); think about breakfast for the twins; lay out their matching clothes for the day; shower; then wake-up call for everyone else in the family, and the madness begins. 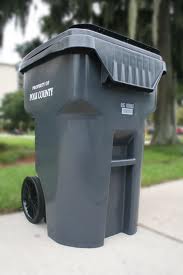 And Monday mornings were especially exciting since it was garbage pickup day.

Her organizational skills trumped all others. She was super wife, super mom, super friend, super bank vice president; super community volunteer and super everything. Schedule and a daily checklist were her inspiration, all coordinated from the calendar and notes of her mini Ipad. She managed an unmanageable schedule with total, masterful control.

If she could only control her garbage…

Weekly curbside garbage pickup came to Jenna’s quiet cove about 10:15 every Monday morning. Around 5 p.m., each Sunday, Jenna wheeled the garbage can to its proper place near the driveway curve and parked it at a proper 90 degree angle adjacent to the street. It brought a certain feeling of triumph each Monday morning when the garbage was picked up, and hauled away.

The garbage was gone, hauled to a distant landfill, and never seen again. Sort of.

As much as she loved taking the garbage out and sending it way, one thing still really nagged at Jenna. It was her trash can. Specifically, the bottom of her trash can.

Every two weeks, Jenna made a trip to Wal-Mart to stock up on household supplies. Garbage bags were almost always on the Ipad list, and Jenna didn’t skimp for the cheap bags. She bought the 40-ply, scented bags that held everything and covered up the odors accumulated by a family of four each week.

But frequently, there was a problem with the bags, and for someone like Jenna, it was a nagging problem she could never quite release.

No matter how carefully, how strategically, how methodically, Jenna 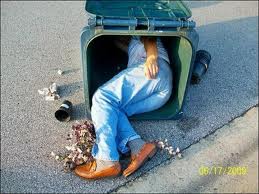 placed items in the trash can, something always seemed to pierce the best bags money could buy, and what remained behind was awful.

Whatever pierced the trash bag on a given week facilitated the dripping stuff that quietly oozed to the bottom of the can. Spoiled milk, spaghetti sauce, yogurt, all the disgusting liquids that never stay in the tightly wrapped boneless chicken breast package.

They all made their way to the bottom – a collective, offensive concoction – the foulest of reminders of the family’s garbage – and it was putrid. Every week.

Each Sunday evening, Jenna would take the garbage out, pleased to send it on its way, only to come back to the trash can, see the remaining filth, stare it down, and curse it. She washed it thoroughly with bleach every week, but it always came back. Some weeks what remained was less grotesque than others, but, in some form, it was always there.

She often wondered what it would be like if there were a garbage bag that could hold everything. Everything? …and be sent away forever so she could move on to other things.

One thought on “The Parable of Waste Management”