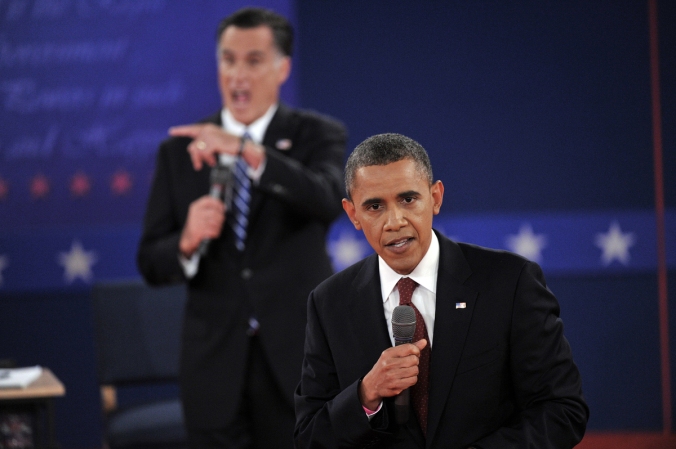 I’m not a political commentator, but I sometimes play one on the blog.

If I were, however, that’s the post-debate analysis I’d give my audience this morning following a lively 90-minute mono e mono between President Barack Obama and Massachusetts Gov. Mitt Romney.

It’s true. The debate winners weren’t even in the room.

CNN’s Candy Crowley moderated a sometimes lively debate Tuesday night that allowed Obama and Romney to trade some effective jabs. Romney actually had fair momentum during the debate’s first 40 minutes as the topics remained mostly domestic in nature. But as the discussion went abroad, Romney lost his talking points, and the two candidates ultimately finished in a draw.

Best case scenario for either … Obama likely recaptured the tiny percentage of wavering Democrats who were dismayed by his first dismal debate performance. And Romney didn’t lose.

From Romney’s perspective, a November victory is “all about the economy, stupid.” He should have never let his message go outside the 50 states.

Objectively, however, the debate was a draw, and here’s what that means.

The election’s a foregone conclusion in at least 45 of 50 states. Florida, Virginia, Pennsylvania and Colorado all still carry weight, but the big chips are in Ohio.

More than 11 million Buckeyes will determine the next president of the United States.

Make a conscious effort over the next two weeks to see how many times “Ohio” is mentioned in the stump speeches. You’ll see. The political promises now being made to Ohio’s political leadership are pork barrel politics at their best, or worst, however you may choose to view it. But Ohio carries all the chips. The pot of gold at the end of the rainbow lies somewhere between Akron and Toledo.

At this point, the two might as well go to Ohio, fight it out in a duel, and let the last man standing take the White House.

And there’s also this.

No doubt Romney gained momentum immediately after the first presidential debate. There was a certain pressure last night on both candidates. Romney needed to show his first performance wasn’t a one-time fluke. The president needed to show he still had some fire in his belly.

Whatever the talking heads say today, the debate was a draw. A draw last night, or any future draws for that matter, equate to four more years for Obama. Without a knockout that leaves Obama down for the count, Romney loses. It could happen, but time’s running out.

If you accept the notions I’ve proposed above, here’s the future significance. Throughout last night’s debate, you could almost hear he squeaky wheels of two new presidential campaigns beginning to turn.

New Jersey Gov. Chris Christie and former Florida Gov. Jeb Bush are the Republican party’s next big sticks. Publicly, they’ll support the party guy for the next two weeks, but never doubt for a moment they’re waiting in the wings for an Obama victory that immediately propels them both to front-runner status in 2016.

Think you’ll get a break from presidential politics when all this is put to bed in a few more days?

The party’s just getting started.

4 thoughts on “Who Won the Debate? Chris Christie, Jeb Bush and 11.5 Million Buckeyes. That’s Who.”