I’m on the record as a critic of Mitt Romney‘s campaign, and until last night, it was, in fact, a disaster. Less than two weeks ago, I said the 2012 presidential race was over. 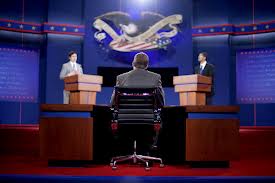 It doesn’t require a lot of in-depth analysis to see exactly why Romney was the hands-down winner in last night’s debate. It wasn’t a necessarily stellar performance from Romney, but it was good. I give him a “B.”

Romney’s win was more about President Obama being totally off his game by way of the environment.

1. The moment Jim Lehrer announced the debate crowd would be silent, well, it was a game changer. Obama’s a great speech maker. One of the best. No one feeds off a crowd like Barack Obama. For the POTUS, the required silence was deafening.

2. For the first time in four years, Obama stood on stage with another man as an equal. Obama’s always played the role of the smartest guy in the room. In his mind, he has no equals. Last night was mono e mono. It’s been a long time since Obama was put in a defensive position. Romney blew by him like Michael Jordan.

On the grading scale:

Things just got interesting, and a LOT more money just got poured into a negative TV campaign.

6 thoughts on “The Debate: Romney, Rules and Ego Beat Obama”