(Blogger’s Note: One of the things I’ve learned along the book publishing journey is that controversy isn’t necessarily a bad thing. I’ve also learned it’s a good idea to sometimes test those controversial topics. This is a sample chapter idea I had early yesterday morning for my current work “Light Wins.” I’d welcome any thoughts. ~ steve) 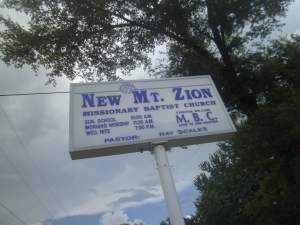 I live in the South.

We don’t have a history of being the most enlightened people in the world, but I’ve always taken a certain pride in being a Southerner. In the South, we drink sweet tea, say “yes ma’am” and we go to church.

Oh, how we go to church.

In the South, we’ve come a long way. Or so I thought until a “church experience” just yesterday. Here’s some background on how it began:

Four days ago I learned about the death of a colleague who was a local television news icon. Jack Hill was the lead anchor for KAIT Channel 8 in Jonesboro during the 1980s.

Hill was an investigative journalist during my years as a teen, and a man for whom I had great respect. When I learned of his death, I was compelled to write a short post about his career that can be viewed through this short link: http://wp.me/p2bjEC-py

Jack Hill and Ray Scales (right) in their prime as investigative journalists.

The post wouldn’t have been complete without interviewing Ray Scales, Hill’s go-to camera man for a decade, and a man who was a mentor of sorts to me when I was a greenhorn reporter at The Jonesboro Sun from 1988-1998.

Scales was gracious to take an early morning Saturday phone call and share some thoughts about Hill’s intriguing career.

Speaking with Scales Saturday brought back many good memories, and I decided I’d attend his church service the following day. For many reasons, it was an enlightening experience.

In the South, we still have what we casually refer to as “black churches.” I’m not sure why, because I’ve never heard a church referred to as a “white church.” Nevertheless, we have no qualms about making the “black church” reference.

New Mt. Zion is a black church. Most anyone would acknowledge that. In yesterday’s church service I was the only white man in the house.

And I’ve never had a more enjoyable “church” experience.

We were greeted with pure love, open arms and grateful hearts. Ray acknowledged my family as special guests, and at the service’s conclusion he even asked me to say a few words. I was so honored to be a part of their service … it was uninhibited worship at its very best. The New Mt. Zion Choir is nothing less than spectacular, and Scales’ message delivery was captivating.

But I was the only white guy in the house, and it really got me thinking. 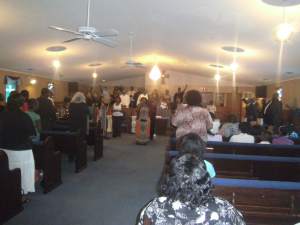 VIEW FROM THE BACK PEW: Enjoying the praise and worship of the New Mt. Zion Baptist Choir. They make a joyful noise!

It’s crazy that we even conceive the notion of “black” and “white” churches.

Is the South still that much in the dark?

Two years ago, my wife and I had a short career stint in Mountain Home, Arkansas. For the time we were there, we wanted a church home and our first visit was to a large denominational church where many of the townspeople worshipped.

We had two distinct observations. There wasn’t an African-American in the house, and not a single person said “hi” to us.

We were dumbfounded no one spoke a word of welcome.

Caught up as I was in New Mt. Zion’s wonderful service yesterday, my mind drifted. I just kept wondering if any of their church members would have been as welcomed in a “white” church as we were there. And, moreover, as Southerners, why do we self-segregate, black and white, as a body of believers. We’re doing this to ourselves. If there’s one place we should come together as one body, it’s the church, is it not?

My hope is that we’re on the path to making some progress.

An introspective process now ongoing by two of the South’s largest denominations offers that hope.

At its most recent national gathering, the Southern Baptist Convention elected new president Fred Luter as the first African-American leader in its 167-year history. Luter’s election signals an important statement in the SBC’s effort to distant itself from its racist past.

The SBC was founded in 1845 when Baptists split over the issue of slave ownership in the pre-civil war years.

The SBC’s debate over a possible name change to “Great Commission Baptists” is ongoing.

Likewise, at its 2012 general conference, United Methodists considered a number of changes in operational standards to lessen the group’s bureaucratic structure and reach out to a more diverse following. The issue of homosexual membership and pastoral leadership is a debate that continues for the group.

We’ve certainly lived out the circumstance of our own Dark Ages here in the South. I wonder if we’re making progress, or if we continue to live in the shadow of our past.

For a semi-related post about Ray Scales and Jack Hill you may view some thoughts on my secondary blog here: http://wp.me/p2wzTk-2m

3 thoughts on “The Black and White of Dark and Light: Self-Segregation in the Church of the South”